Resistance is Alive: An Evening of Words and Images from Rojava

When: November 1, 2014 (Exhibition will run until the end of November)

The first event of the Rojava Media Project took place in Toronto at Beit Zatoun on November 1, 2014.

In August 2014, a team from the project visited Rojava region to establish a media training center for a group of young men and women in Qamishlo and to start documenting the daily resistance of the people in the region. This event is a showcase for the participants in the project to exhibit some of the videos and photographs taken during our two weeks training program in Qamishlo.

Along with exhibiting photographs from Rojava, a short video was screened, and guest speakers shed light on many aspects of Rojava revolution. It was also a fundraising event for Anatolia Cultural Foundation, a registered charity based in Toronto and the main funding organization of Rojava Media Project.

Here is the video of the reception night that was filmed and edited by Owen Sheppard:

The exhibition and sale runs at Beit Zatoun until November 30, 2014. Take a look at  some of the pictures at the exhibition..

In mid July 2015, Rojava Media Project, in collaboration with Diyarbakir Municipality's Cigerxwin Cultural Centre and Kurdish filmmakers, held one week of photography and video-making workshops for a group of young Yazidi refugee girls in Fidanlik Yazidi refugee camp in Diyarbakir, Turkey. After Shengal (Sinjar) massacre in August 2014, tens of thousands of Yazidi Kurds fled their towns and villages in the Kurdish region of Iraq. About 4000 of them have taken refuge in Fidanlik Camp, which is built and managed by Diyarbakir Municipality. In this workshop series, we tried to focus on the stories of home and belonging in this refugee camp using the mediums of media production, especially photography and short videos. 7 Yazidi refugee girls were trained in this workshop series. A photography exhibition was held at the camp upon the completion of the training, and a short documentary is in the process of final edits from the videos that were shot during the program.

See some of the photos from this workshop series in this photo gallery. 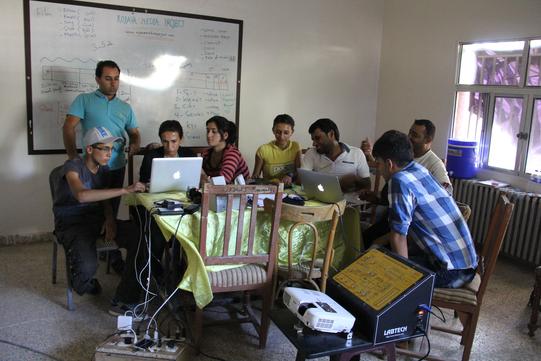 Rojava Media Project also produced a short experimental documentary with young Rojavan students during the trainings. See the teaser below.

For more photos from our workshops, see this photo gallery.